An especially beautiful example of Book of Hours, painted by the David Master, a great name among Flemish artists such as Simon Bening.

Lovingly detailed interiors, landscapes extending to the horizon, borders strewn with deceptively realistic flowers and insects—these are just some of the achievements in painting that characterize fifteenth- and sixteenth-century Flemish book illumination. An especially beautiful example of this artistic perfection is the Flemish Book of Hours of Marie de Medici.

Featuring three full-sized illuminations similar to paintings, 42 full-page miniatures, historiated or golden initials, and borders covered in Flemish or Italianate flowers or architecture on every page of text, the Flemish Book of Hours of Marie de Medici has 176 pages measuring 20.4 × 13.7 cm, each one with unusually luxurious illuminations. 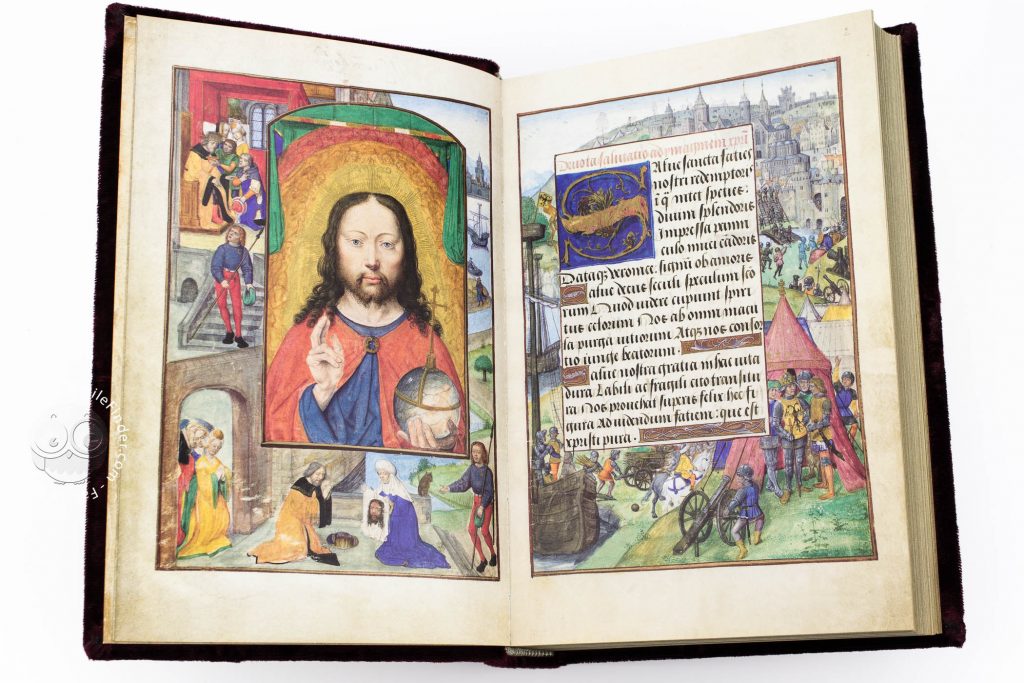 The Flemish Book of Hours of Marie de Medici was probably commissioned by a wealthy female patron in Ghent or Bruges and produced between 1515 and 1520 by an anonymous artist known today simply as the “Master of the David Scenes in the Grimani Breviary.” The David Master was one of the great Flemish masters and is mentioned in company with Gerard Horenbout and Simon Bening. The David Master was at the apex of his career and artistic maturity when he began working on the Flemish Book of Hours of Marie de Medici, and it is one of the most elaborately ornamented works ever to come out of his studio. In each and every one of the miniatures, the reader can see that the illuminator took great pleasure in telling and depicting stories. Dynamic compositions and a brilliant palette characterize his style. Another outstanding hallmark of his art is his love for architecture: all of the details in the master’s pictures of city streets and squares are faithfully rendered, permitting us to see inside late Gothic churches, studios, and private chambers.

In case you missed it: check out the beautiful gallery of the Flemish Book of Hours of Marie de Medici and find out all the facsimile editions available on Facsimile Finder!

In order to be able to tell as much of the story as possible, and not simply illustrate the main miniature’s given theme, the David Master created detailed, refined architectural structures, turning the main image and its borders into an apparently unified space. He then composed other biblical or legendary stories like genre scenes, relating them to the main miniature.

Marie de Medici was probably as fascinated by the interplay of the carefully harmonized, glowing colors of the miniatures in her book of hours, as we are today. The unusually intense, brilliant powdered gold lends the pages an additional loveliness. Not only is this “gold dust” background perfect for showcasing the famous Flemish borders strewn with flowers, which appear on every page of the manuscript, but some of the robes and frames of the miniatures are also highlighted in gold, intensifying the effect of the delicate glow on every page.